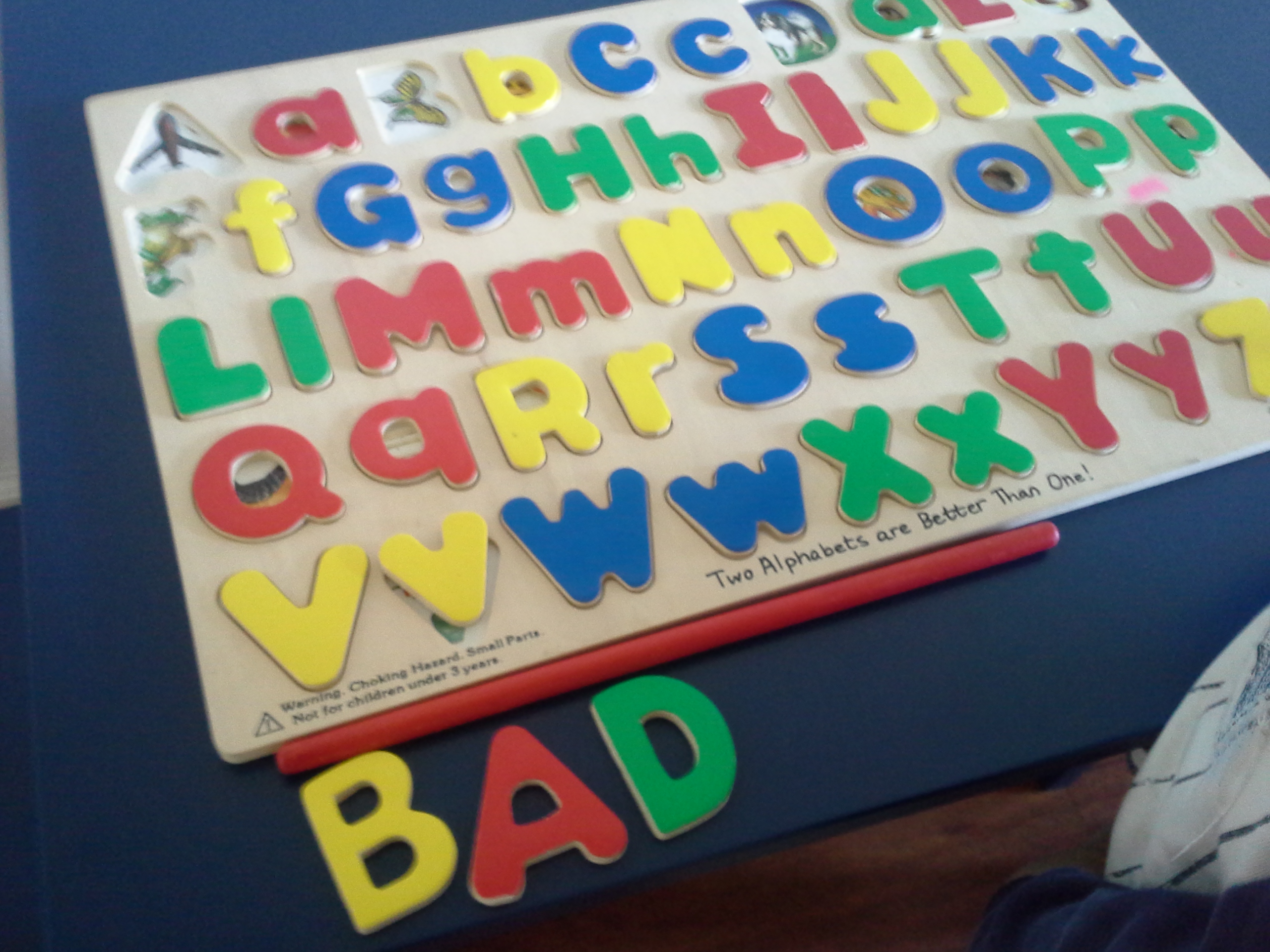 How Can a Parent Encourage Self Directed Learning at Home?

My youngest child loves to play a make believe game where he is going after bad guys. He turns almost anything into a pretend weapon. Ask any parent of boys and they will tell you that even if you keep all play weapons out of your house, your son has the ability to pretend any toy is a weapon!

On this day, he and I were playing a game of chasing bad guys with his pretend weapon that he made out of Tinker Toys. He passed by his small child size table where his alphabet puzzle was placed. Upon looking at the puzzle, he started making the “B” sound. I stood back and watched to see what he was doing. I heard him saying the word, “bad”. He took the ‘B’ off of the puzzle and placed it on the table. I immediately realized that he was trying to spell the word “bad” as in “Bad Guys”, the name of his game. He continued to sound out the word attempting to figure out the next letters. This is a developing skill for him, he has not yet mastered this. He’s pretty good at hearing beginning and ending sounds on his own, but middle sounds are still tricky for him. Knowing this about him, I came to his side and modeled for him how we say each sound slowly and clearly so that we can figure out what letter to put next. With me saying the sounds that came next, he was able to match the sound to the letter and correctly spell the word. Obviously this doesn’t work for all words since there are so many special cases in English. In fact, he wanted to spell the word “guy” next so after he figured out the first letter I just told him the rest!

He was motivated to do this task because it helped him in the creation of the game he made up. He had a true purpose for using this skill so he had the motivation to learn it. The desire to learn came from him, not my desire for him to learn it. The difference between the two is huge. If I would have said, “Let’s go spell ‘Bad Guy'”, his level of motivation may not have been the same. He chose to spell the word, therefore he already entered the task with a real interest in understanding how to spell.

The parent role is not passive. In this example, my role started even before the event happened. By having the puzzle available to him whenever he needed it, I was helping to prepare his environment with letters that he can move whenever he wanted. Once he started the task, my role was to help him when it was appropriate. In this case, I modeled for him how to sound out a word to spell it. It is always a matter of judgement when we should step in and help or let them be to figure it out on their own.

Children are curious. If you prepare their environment and help them when they need it, you are guiding their  learning. Observe your children. What interests them? Is there something they have never tried before? This will help you decide what are good tools, toys, pictures, and objects to have in your house to pique their curiosity!

This example was how I helped prepare the home environment with engaging toys that serve multiple purposes. To keep this in context, remember– exploring the outdoor environment is incredibly enriching, complex, and open ended (meaning there is more that one way to play). Free play with in a safe environment is essential to their development also!

The Three Books That Taught My Kids To Read

There are three books that I have to credit with helping my children learn to read.  They are all part of the Beginner Books Series from Random House. While we have an enormous amount of books in our house, these three stick out to me. Through simple language, rhyming, repetition, and fun illustrations, my children…

15 Really Easy To Read Books For The Beginning Reader

It’s exciting when your little one begins recognizing words and wants to learn how to read! You want to encourage his or her new found skill, but don’t want your child to get discouraged reading books with too many words that s/he doesn’t know. Feeling like a good reader is so important! I compiled a…