If you are teaching your young one early math skills, maybe you should head to the toy store!  My secret weapon for teaching kids skills such as one to one correspondence, counting, subitizing, doubling, and adding is Parcheesi!

Disclosure: This post contains affiliate links.If you make a purchase from Amazon, I receive a very small fee at no extra cost to you. 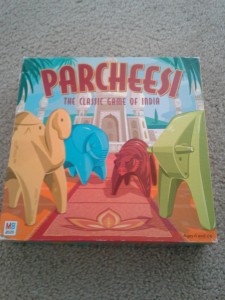 First of all, if you are unfamiliar with the game, I will very briefly describe how the game is played.  Your four pawns are at home, where you wait until you roll a five or a two dice combination of five to enter the board. The game uses two dice to indicate your spaces to move.  You can add the dice together to move one pawn or let two pawns share the dice combinations.  You have to go all the way around the board and get all four pawns to your home to win.  Along the way, you can block players and capture players.  It’s a great strategy game!

How does Parcheesi help with all of the math skills mentioned?  Let me explain.

Counting:  When the child rolls the dice s/he can count the dots on each die to figure out the value of each one.  Your child can point to the dots while counting. This gives your child a concrete way of practicing counting with an authentic purpose (to see how far to move).

With enough practice, s/he may begin to recognize that three dots is “3” without even having to count the dots.  S/he is subitizing, or recognizing a number quantity quickly without the need to count.  With enough hands on practice counting, s/he will begin to do this automatically.  By playing this game your child is getting a lot of practice counting and subitizing.

Adding:  Since this is a game that allows two dice to be added together to determine the number of spaces to be moved, your child is also practicing adding.  With the help of the dots, your child has a visual representation of the numbers in which to count.  The more practice your child has with objects they can point to and add together (the dots), they will naturally begin to remember some of these math facts and also create a visual representation of number quantities which they will use to figure out new problems.

One to One Correspondence: This skill is practiced in two ways. First, when your child counts the dots on the dice, s/he should only count each dot once.  For example, if your child rolled a six and counts one the of dots more than once, s/he may incorrectly say there are seven dots.  Encourage your child to count again making sure s/he doesn’t count any dots more than once. With sufficient experience your child will become very good at counting each dot only once.  S/he will likely figure out a strategy that works for him or her to keep track of which dots s/he already counted to avoid over or under counting.

Another way your child is practicing one to one correspondence is when s/he moves their pawn.  Your child can advance one space per number. So, if s/he rolled a six, s/he can only move six spaces.  Young kids may skip spaces or count faster than they move.  Encourage your child to count slowly and move the pawn as she counts.  Sometimes it helps if you, the parent, point with your finger to the next space so your child doesn’t skip spaces. With enough help and practice, your child will learn to move one space per number rolled.

Doubles:  When your are working with two dice there is the chance that you roll two of the same number. You can introduce the term, “doubles”.  For example, if your child rolled two twos, you can explain that two of the same number is called “doubles”, so s/he just rolled double twos!  Not only are you introducing a new term, but you are also building a beginning foundation for multiplication.

Eventually, your child will commit the these facts to memory.  Having double facts in their memory banks gives them a reference point when figuring out new facts. For example, if your child knows that 5+5=10,  s/he can can use that knowledge plus pattern recognition to quickly figure out that 5+6=11. 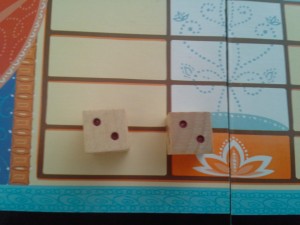 Truthfully, there are many games that can also help your child practice these skills.  Any game that has a board with individual spaces and uses dice can do this!  I like Parcheesi because it tends to be a little longer in terms of play time, giving more practice! My kids also love that they can capture me and send me back to home, keeping them motivated and excited to play.  So next time your child complains about math homework, maybe taking a game break might help

To purchase Parcheesi on Amazon:

Next ArticleEcosystems- How Living Things Connect