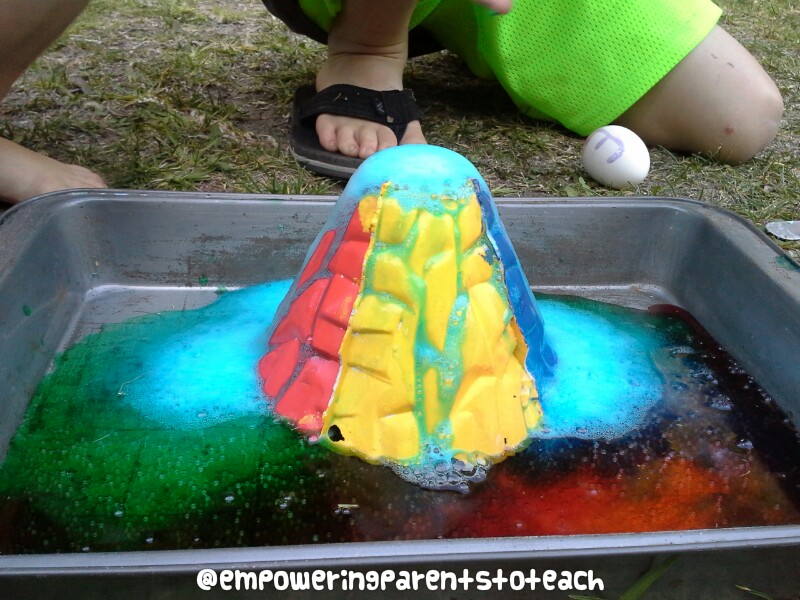 We had a dozen left over hard boiled eggs from our egg hunt.  My three year really wanted to do science experiments with them.  He enjoys mixing things, so his initial idea was to put the egg in some kind of mixture.  At first he said he wanted to get two cups- one with cold salt water and one with hot salt water.  He would put the egg in each cup and see what happens. But then, another idea came to him, he wanted to make a volcano and put an egg in it.  Mixing vinegar and baking soda is one of his favorite activities, so I think that is where his idea came from. He hypothesized that if he placed an egg on top of the volcano, the egg would fly into the air from the eruption.

That was how our adventure started!  My boys worked together to make a volcano using a kit my oldest received as a birthday present.  I was impressed with the quality of the kit, even the paint looked crisp. 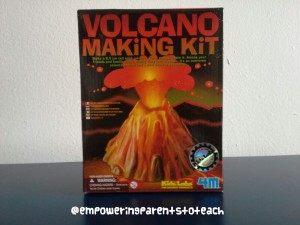 My little one announced he would paint the volcano all red, but my oldest wanted to paint it multiple colors.  My youngest went along with his older brother’s idea and they created a super colorful volcano! 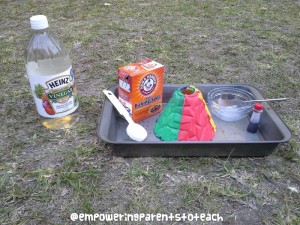 Next, we ventured outside to see what happens when you place an egg on top of a plaster volcano, mixing baking soda and vinegar to simulate an eruption.  We had red food coloring to dye the vinegar so the eruption looked more like lava.  With the baking soda already poured in the eruption chamber, the egg was carefully placed on top of the volcano. 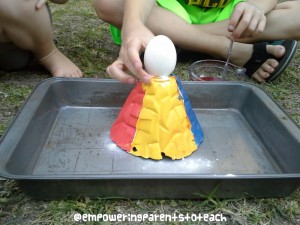 They lifted the egg slightly to add the vinegar.  Quickly, they placed the egg all the way on to see if it did in fact fly in the air.  It did not.  I asked the boys why they thought the egg didn’t fly into the air, and my oldest was able to articulate that there wasn’t enough force to send it flying.  We also chatted about the chemical reaction that occurred and the carbon dioxide that was formed.  To learn more about this with a kid friendly explanation we visited this website. 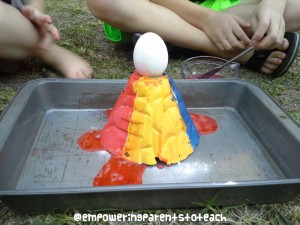 Another thing my kids love is coloring mixing, so upon seeing the food coloring, their next idea was to mix the vinegar with all different colors. 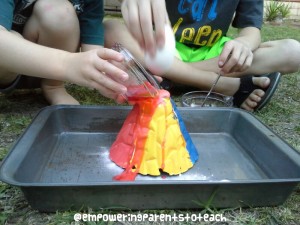 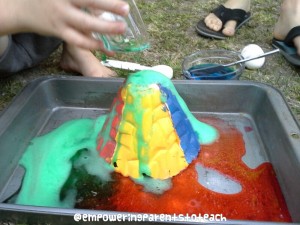 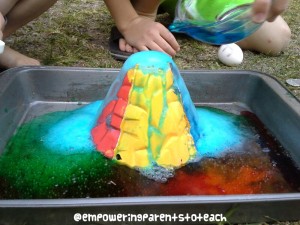 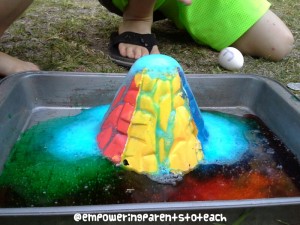 We had so many more colors- orange, bright green, purple, pink!  They had so much fun watching the colors erupt from the volcano.  This activity brought a lot of smiles and it was all their idea!  They were even surprised to see that the egg was dyed in the process.

Now that they are so interested in volcanoes we picked up these books at the library:

Life Skills: Adapting to the Environment You won’t find skills like this in any type of government mandated curriculum, but it is just as important! Possibly, even more important. Do our kids understand how to survive and navigate their surrounding environment? Isn’t all of this learning from school and home supposed to teach them how…

Next ArticleCounting Money for Beginners