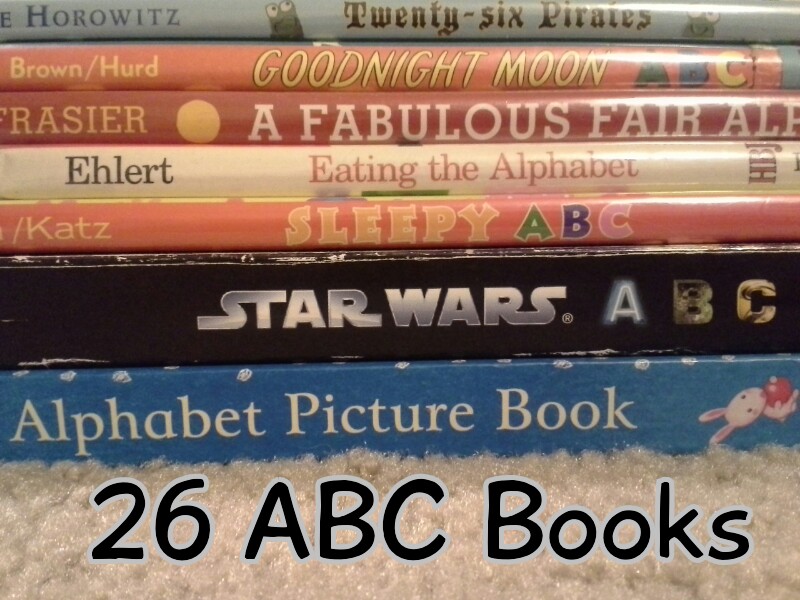 There is definitely not a shortage of alphabet books out there!  Thankfully, with so many to choose from you are sure to find at least one that your child will enjoy.  I’ve listed twenty six of them to help you find one (or two, or three…) just right for your little one!

From classics, such as The Z was Zapped by Chris Van Allsburg to high interest books with princesses or Star Wars, I wanted to include books that were either beautifully illustrated, unique, whimsical, themed, or funny.  You will even find an ABC book is three languages!  I selected these carefully focusing on books that highlight each letter with minimal text to it.  They are all wonderful in their own way!

If you click on the book’s picture, it will take you to Amazon.com (affiliate links).  Once there, you can use the “Look Inside” button to see inside some of the the books and read the summaries and reviews.

7.  Eating the Alphabet: Fruits & Vegetables from A to Z by Lois Ehlert

8.  Alphabeasts: A Hide and Seek Alphabet Book by Durga Bernhard

11.  B is for Brooklyn by Selina Alko

15.  Z is for Zamboni: A Hockey Alphabet by Matt Napier

17.  The Z was Zapped: A Play in Twenty-Six Acts by Chris Van Allsburg

18.  G is for Golden: A California Alphabet by Dave Domeniconi  (other states available too)

19. P is for Princess: A Book of First Words and ABCs by Disney Book Group

25.  A World of Words: An ABC in Quotations by Tobi Tobias

To be released on June 26:  R is for Robot: A Noisy ABC by Adam F. Watkins

I hope you found something that you and your little one will enjoy reading together!  My sentimental favorite is Usborne’s Alphabet Picture Book because I have so many memories of my youngest as a baby hidden in those pages.