Do you have a beginning reader?  When your little one recognizes enough sight words to read simple books, he or she may enjoy this activity.  It helps young readers reinforce words they already know, practice new words, and understand the concept of a sentence.

My son is a beginning reader and he just started routinely reading out loud to me every night before bed.  This routine was started by him mainly to  put off going to bed, but I went with it.  Now that he is motivated to read, I began this activity using sentences that he was capable of reading from his nightly books.  Like any learning activity, I only do it if he enjoys it and is motivated.  If he isn’t interested, I don’t push him.  He actually asks to do things like this because he wants to ” do homework” just like his older brother!  This activity is one that he enjoys.

Here’s what we did:

1. He found a book that he wanted to read.  He could read some of the book independently and I helped him with the words he did not know.  He picked I Like Crabgrass from an early reader set. 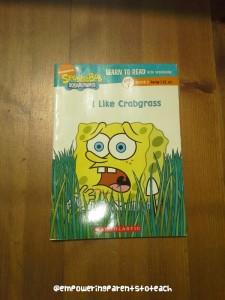 2. The next day, I picked out a sentence that he was able to read all on his own without my help. In this case the sentence read, “It did not like to be cut at all!”.  I wrote the sentence on a sentence strip.    Teaching Tip:  I purposefully chose a sentence that he could easily read on his own so he would be successful in this activity.  I can always increase the difficulty if need be, but at this early stage I want him to feel capable of reading. 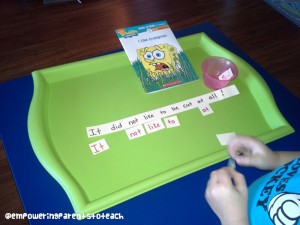 I kept the book on the tray to remind of us of the sentence’s context.

5.  After he was done, he read the sentence that he created to make sure it was correct.  We also looked to see that each word matched visually. 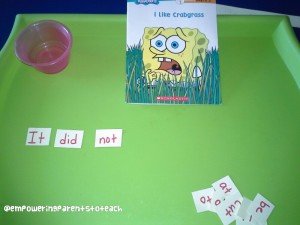 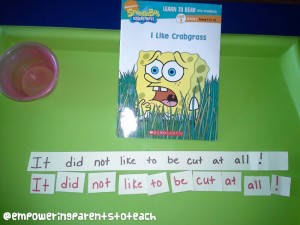 7.  After this, my little one wanted to dictate the sentence to me and see if I could make the sentence.  He was now the teacher! 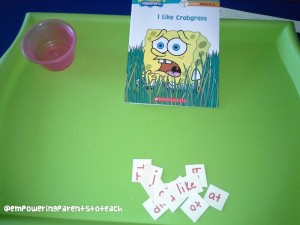 9.  Once he was done, I put the sentence into a chart that is designed to hold sentence strips.  I hung this where he would easily see it on a regular basis.  This allows him to read the sentence any time he wants to.  As we read more books, I can pull more sentences for him to practice making and add them to his chart. 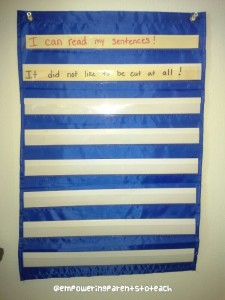 Why did I do the activity this way?

We kept it short and sweet so the learning activity ended on a fun positive note!  We can repeat this activity with different sentences from other books he reads and add them to our chart.  The more words a child can read by sight, the better his or her reading fluency will become!

With enough exposure, sight words become easily recognized to a new reader. This game gives a fun opportunity to increase a child’s experience with these words!  Kids have to pay close attention to the words on their lists as they search to find hidden sight words.   Materials: Sight word cards to hide (print out…

Next ArticleMath in Literature: Counting to Fifty