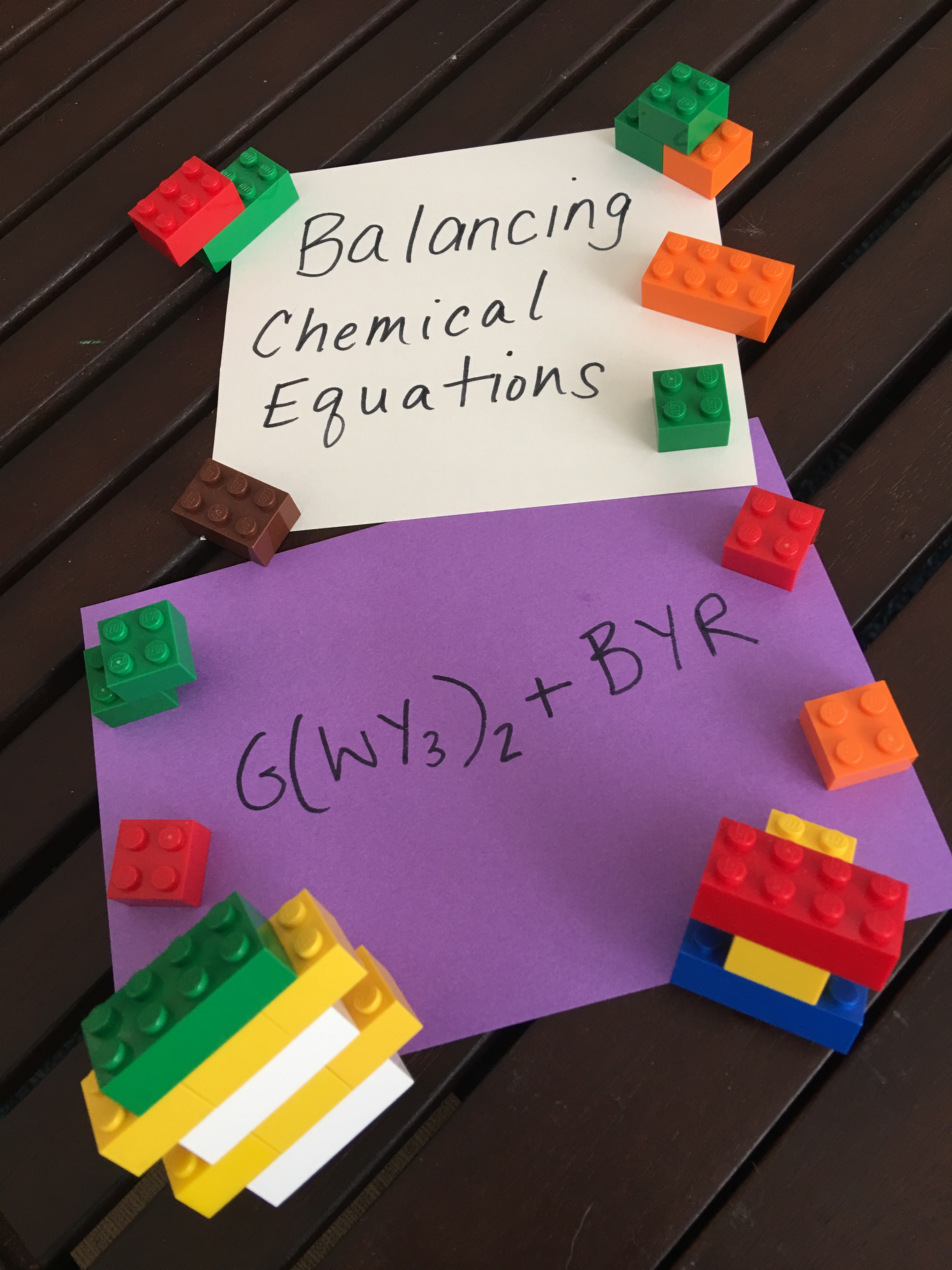 Our fantastic science mom, Staci, has created another engaging science activity for us. This time she shows us how we can teach our kids how to balance chemical equations using Lego bricks!

Before you read the activity, print out the Chemical Equations Worksheet so that you can refer to it as Staci explains how to use it!

Recently, my son found a song about the periodic table on YouTube.  He watched it repeatedly and then followed it up with episodes about Chemistry on YouTube from CrashCourse.  I wanted to think of something I could do with him for our Science Saturdays that expanded on the topics he was learning.  I came up with an idea to balance chemical equations using Lego bricks.  I thought using Lego Bricks as manipulatives would make the concept more concrete and easier to grasp, and also because we have eleventy billion Lego bricks scattered in all the corners of our home.  If you don’t have many Lego bricks of many colors readily available, mathlink cubes could be another good option.  We own several molecular modeling kits, but there aren’t as many different color atoms available in these kits and the bonds are often difficult to manipulate.

I started by creating 20 equations for my son to solve.  I made equations with “chemical symbols” that referred to the color Lego he should use rather than actual chemical symbol to avoid unnecessary confusion.  We then gathered around 8 blocks each of 5 different color Lego bricks (white, blue, green, yellow, and red).  We started our activity by talking about a key concept: Conservation of Matter.  The Law of the Conservation of Matter states that the mass of a system must remain constant over time in a closed system.  In reference to balancing chemical equations, this means that the number of atoms of reactants must equal the number of atoms in the product.  Or as we said “what goes in, must come out”.  We also needed to understand the way that chemical formulas are written.  When a number is written in subscript it shows the quantity of atoms of the element it immediately follows.  When a number is written in front of a molecule it applies to all the atoms in the molecule.  For example: H2 shows 1 molecule of 2 hydrogens bonded together, while 2NaCl shows 2 separate molecules of Na bonded to Cl, or 2 Na atoms and 2 Cl atoms in total. 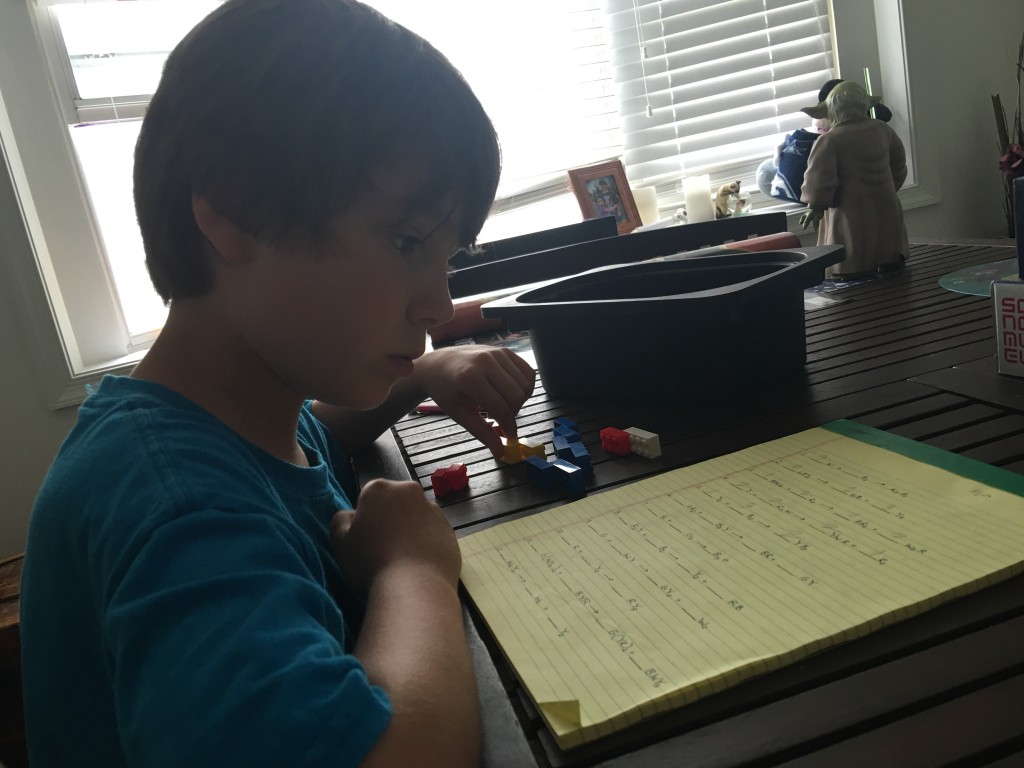 Next, we talked about how we would begin to solve the equations.  My son solved the first 5 or so equations entirely using the Lego bricks.  He began by assembling one molecule of each reactant and then breaking them down to form the molecules of the products.  He quickly observed that sometimes more molecules of reactants would need to be present in order to form the different molecules of product and sometimes there would be leftover atoms that would need to find a home in the equation, perhaps by increasing the number of molecules of product. Using the Lego bricks he was able to visualize where all the atoms were going and where they came from.

After finishing the 20 equations I had written out for him, he expressed an interest in balancing equations using real chemical symbols that make up real molecules.  I made a short list of 5 equations just for him to try out.  He was able to transfer the knowledge he used with our made up chemical equations to real world equations very easily.  And as a bonus, this gave us a chance to practice identifying elements by their chemical symbol and also the nomenclature of molecules.

After spending so much time doing math and worksheets, I thought it might be fun to see a chemical equation in action!  I wrote the equation for the reaction of baking soda and vinegar and asked my son if he recognized any of the molecules and asked him if it was a balanced equation as written.

Note:  Vinegar is a mixture of many different chemicals.  It is typically 5% acetic acid dissolved in water, so the molecular formula for acetic acid is used in this equation.

This equation is balanced as written, but we wondered how we could prove that the equation is an accurate description of what took place.  Usually we play with baking soda and vinegar in a way that will result in an uncontrolled eruption, but this time we wanted a smaller reaction that we could observe more closely.  We combined a small amount baking soda and vinegar in resealable sandwich bag, and sealed it up to watch the bubbling reaction.  What happens to the bag as the reaction takes place?  How could you test the contents of the bag to validate the chemical equation?  (Hint: O2 is necessary for flame, H2 causes an explosive pop of flame, CO2 will extinguish a flame)

We really enjoyed this activity.  I initially worried that it might be a little advanced for my 8 year old son, but he surprised me with his enthusiasm and quick comprehension.  A few days after we did this activity, I found a Lego “molecule” sitting on the dining room table with a legend defining Lego brick color to chemical symbol and the instructions to solve his Lego molecule’s chemical formula.  I love when enthusiasm for learning something new is carried over into playtime on his own, it makes these activities worth it!