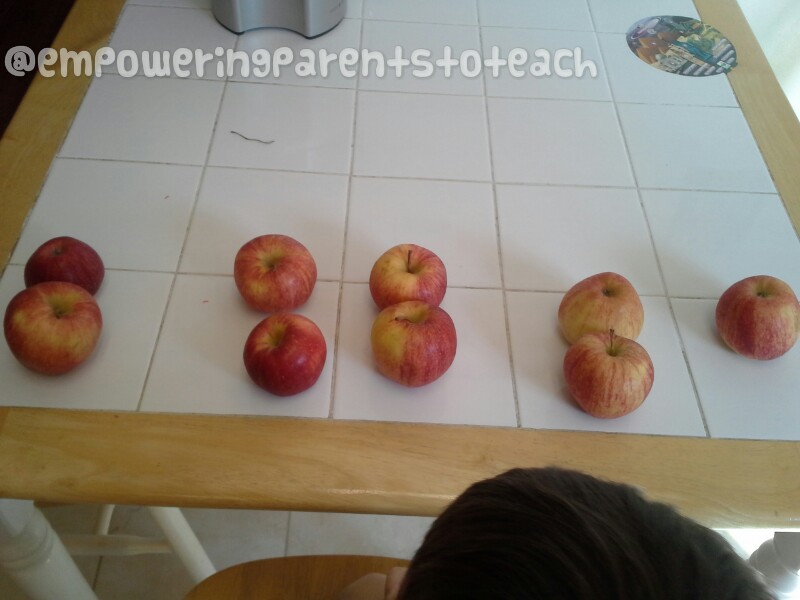 Education is not preparation for life; education is life itselfJohn Dewey

There are so many learning opportunities around us, naturally, everyday.  Life requires skill, knowledge, patience, problem solving, and sometimes research.  We don’t have to contrive a learning experience for our children to learn.  We need to learn to survive and survival is our basic instinct.  Your child wants to learn!  Keep your eye open to opportunities in your children’s everyday experiences.  What skills or knowledge do they need to complete a task or solve a problem?

Sometimes it is best to let your child figure it out themselves, other times your guidance with the experience is beneficial.  I truly believe finding these natural teachable moments are the best way to teach!  Why?  Simply because the child is learning the skill within the context that is actually used, is by nature hands-on, and the child has a real purpose for solving the problem or learning the skill.

I’ll show you what I mean:

My son wanted make fresh juice.  Our go to recipe is to add kale, apples, celery into our juicer.  As I was finishing the dishes in the sink I asked my son (age 3) to get the apples out for me.  He took the whole bag to the table and I hear him count- one, two, three, four, five, six, seven, eight, nine.  I walked over to him and noticed how he placed the apples. Instead of lining them up he placed them two by two with one by itself (as pictured).

By setting up his apples this way I noticed a natural occurrence of something that I knew he was learning.

A little while ago we read the book One Odd Day by Doris Fisher.  It touched on the concept of numbers being even or odd.  My little guy was catching on to the idea.  Once I realized this was a developing skill for him, I later introduced some hand-on activities to play with the concept.  He really liked it!  Knowing that this was a skill he was working on, I asked him if the nine apples were an even or odd number. We talked again about what makes a number even or odd.  We could tell that nine was odd because one apple doesn’t have a buddy (that’s our preschool language).  He looked at his apples again, he told me that four was even.  This showed me that he was continuing to think about the math concept by mentally checking other numbers to see if they were odd or even.

By taking out nine apples, we had a problem to solve.  We only needed four apples to make juice.

Other concepts he’s been working on is addition and subtraction with objects.   Since I only needed four apples for the juice I told him, “I only need four apples.  You need to take some away.  Do you know how many to take away?” At first, he insisted on putting all nine apples in the juicer.  That was really too much so I encouraged him to take away apples until there were only four left.  He took away the apples one or two a time until he only had four left.  As he took away the apples he lined them up on a different spot on the table.  Once he got down to only four apples, he counted how many had taken away to leave only four. Therefore, he realized that he had to take away five apples to get down to four apples remaining. 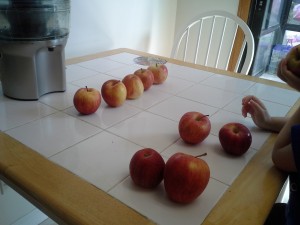 From nine apples, he took away five. The apple in his hand was never counted originally.

My hope is that this gets you thinking about your everyday experiences with your child and realizing their true potential.  You do not have to replicate things exactly as you see them.  A true teacher knows that every child is different and there is no script for learning. Follow your child’s lead.  Keep a mental note of what they can do, what they are learning, and what is too difficult for them.  Life will hand you teachable moments.